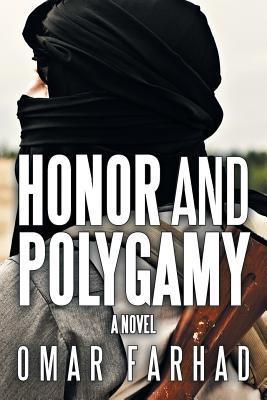 Can a foreigner ever understand the harsh reality of the constant struggle of the Afghanistan people and their culture?

Omar Farhad’s début novel gives readers a closer look at what it takes for people to survive in a world where chaos has become the norm, but  where deep cultural rituals and habits are kept alive.

While Farhad’s story is fictional the novel sheds light on real living conditions in a world constantly torn apart by war. Honor and Polygamy shows Afghanistan’s plight from a different perspective.

Nicholas Blake, a UN diplomat from New York is assigned one last deployment to Afghanistan. However,  Nicholas does not realize how much this deployment would change his life. He never planned on getting kidnapped, and used as a tool for the very Taliban he is trying to help remove from Afghanistan. Nicholas takes readers on his journey of hardships, and the terrible decisions he must make to stay alive, and return home to his wife and children he left behind. Farhad describes both Nicholas’  American world and his Afghanistan world with the relatable interactions of his characters. Will Nicholas’ knowledge of Afghanistan culture, and his nearly perfect Pashtun help him survive his captivity? How far will he go to save his life?

“What if I had done it differently? Would I be in the same mess? If I explained it to Lisa, would she understand? No . No matter how good my intentions were and how bad my circumstances are, my wife will never understand. She will always feel betrayed by and disappointed in me.” –Nicholas Blake in the novel Honor and Polygamy by Omar Farhad.

As a spouse, mother, sister, aunt, and friend of men and women who have deployed to Afghanistan. I am very aware of the dangers that can occur for people on deployment military or civilians. I also think much about Afghanistan people and how the war must affect their way of life. Honor and Polygamy stirs the hearts of readers to empathize with Nicholas’ actions to survive. Readers are left to reflect on how Nicholas’ survival may conflict with their own cultural beliefs and moral values. How far would you go?

We speak briefly with Omar Farhad about his novel and what brought him to tell us his story.

Budom: Were you concerned how recent current events might affect feedback from your readership regarding the political nature of the story?

Omar Farhad: First, I want to thank you for allowing me this opportunity to express myself and at the same time explain the nature of my début novel.

Honestly, I am very concerned with the recent US government’s reckless behavior in the Middle East and Afghanistan. Looking at the recent government changes that the US made or encouraged starting in Afghanistan, Iraq, Libya, Egypt, and now in Syria, the political situation in mentioned nations have become more dangerous. The new weak and corrupt governments are not able to defend their nations against the new created fundamentalist ideology. Therefore, “one dictator is better than many corrupt official”. That in mind, the US experimentation of forced-fed democracy in the Middle East must stop at once before the entire world is pulled into a world war III.

Budom: As an Afghan-American man writing, a reader might assume that the book is very one side. However, I found it was not. Was it difficult emotionally for you to write the story?

To answer the first part of your question, every reader will judge my point of view according to his or her level of understanding. As a writer, the very first thing I have learned in writing is to be honest and truthful. I will never deviate from stating the facts directly or indirectly.

I used to work as a contractor in Afghanistan for a little over two years. After the end of my second year, I realized the US efforts in Afghanistan will ultimately have fruitless ending. In Afghanistan and the rest of the Middle East where the United States has been involved politically, the US government simultaneously failed to recognize the cultural distance, societal complexities, and change political practices. One size does not fit all.

Budom: Could this have really happened in Afghanistan if someone like Nick should request “Nanawatai,” which means “asylum” in Pashtun’s culture, and the language of the southern and eastern Afghanistan people?

Omar Farhad: The honor codes that I have mentioned in my book does exist in reality and yes, if someone like Nick who needed asylum “Nanawatai” would have been taken in by a Pashtun family. These codes of honor are many thousands year old. In a tribal uneducated society like Afghanistan, these codes of honor are still good as gold to bring order and to keep peace.

Budom: What do you want ‘Honor and Polygamy’ to accomplish as a novel? Do you find it is getting good reception with readers and critics?

Omar Farhad: Yes, the book is received warmly. Feedbacks from Amazon and goodreads.com are all positive.

I as an Afghan born had many hopes for Afghanistan. However, “seeing is believing” and what I have witnessed in Afghanistan did not give me hope for a better future.

After 14 years of US involvement in Afghanistan, after many lives lost on both sides, and after billions of dollars lost to a created corrupt system, the American public does not understand why we are involved in that war. The most typical and basic perception of the American people is, the spread of democracy. Well, that is a great idea but, did every American woke up one morning and realized they were born free? The answer is no. Democracy in the United States was achieved over a period of 300 years with many sacrifices made by those before us. The same is true about other nations and the same process and time is needed to achieve democracy.

With Honor and Polygamy, I am hoping to point out missed opportunities, cultural distance, and cultural complexities that were first missed by the British invading Afghanistan in late 1800s, the Russians in 1980s, and the US since 2001.

Budom: Will you be writing more on this subject on a future novel or do you have something else planned?

I am currently working on my own memoir, which also have a political side to it. My journey as a child begins right before the Russian invasion and I grow to a young man in war torn country and as a refugee in Pakistan.

Thank you Omar for giving us a look into another world and culture. I look forward to your next book. Honor and Polygamy can be found on Amazon.com.

Born in Kabul, Afghanistan Omar Farhad move to the United States over 27 years ago, and now resides in California.  Farhad holds degree in Aviation from Spartan School of  Aeronautics as well as a degree in Global Economics from the University of Phoenix.

Q & A with Omar Farhad, author of the novel, ‘Honor and Polygamy’ – by Kevin Peters